Next Season of BPL

Rego for the next season of BPL is now open at http://www.afda.com/rego/showdivision.php?divisionid=612

One of this blog's fine commenters posted this:

JDR!
blog me your feelings about how BPL now has 2 buggers teams!
with hammers and layouts.
Him

Well, I've seen mention of new teams on the rego site, but I haven't seen 10 players registered on those teams as yet . . .

But having six teams in the BPL would be great. No more byes – although it was great how everyone used the time to train last season. And having six teams makes the season even less predictable (as five has) – there is more scope for upsets. Six also makes for a good finals series – week 1 of Semi 1v4, Semi 2v3 and Playoff 5v6, followed by a final of Semi winners. Six is in my view, "about right" – if we ever grow the numbers of players in Brisbane to support more than 8 teams of players in an Open A-Grade League, I'd be leaning us towards two Open grades – but of course that's still a couple of years away.

Its at that point though that I'd rather be seeing teams 'amoeba' themselves into two squads, as UQ did last season, and my anonymous commenter reckons the Buggers will this season. My preference is for teams to find new identities. But that said, if groups want to feel the comfort of 'still being part of UQ' or 'still being a Bugger' then that's ok by me. And really, anything that facilitates the new teams is better (its always a big step for organiser-types to step up and try to organise!).

Spring is the right time to be expanding any League too - in my experience new players and old hands are at their keenest and most reliable when the weather isn't cool or hot. Advice: if people ever talk about growing a League in Autumn, tell them not to do it – people disappear as it gets cooler!

Six teams in BPL will be a challenge regarding field space. Jon (and Malloy over in YUFL) are LDs who're suffering for their success. They get their leagues humming along, everyone loves it and more people come, you run out of space, and you've got the question of shaking everything up to add more teams and find more fields or playing with multiple time slots. 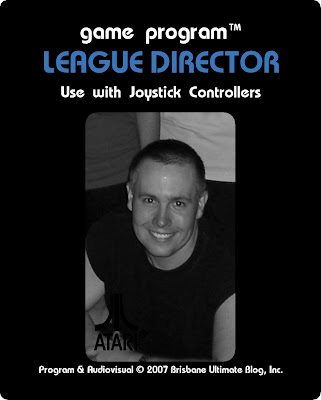 I understand Annerley Juniors has just opened its new clubhouse, so it'll be interesting to see if we are able to or want to access it in some way. One of the sad parts of BPL remains that everyone clears out almost immediately after the games – there's very little reflecting on matches or general socialising. Having a "place" for this would make it more likely to happen – even if it's on some benches under a clubhouse's porch light. However, part of this is because we play fairly late and we're stuck with that while we're at Annerley – if games were finishing between 8pm and 9pm rather than after 9pm then people would be more able to hang around.

Thinking about it, at the moment most of our 'catching up' happens before games when we're supposed to be warming up. I wonder when those interested at the macro-level of advancing the elite level of Ultimate via BPL will realise that getting socialising happening after the game will mean more focus on the game before it!

Of course, socialising will also improve the overall spirit of the League. Bad calls are less common where there are friendship networks - that is, there are stronger connections of respect and channels for discussion of basic clumsiness and errors. And any off-field talk of this is more easily done with a beer in hand.

It has also been good to see the level of organisation getting to the point where teams are getting great shirts, and I hope we can keep this up (particularly as new teams and new players arrive). There are enough people now who've got the experience of organising shirts that I think we'll keep looking better. It is going to be tough for new Rawhide players to get a sprout shirt, for example, but we'll be trying to get 'loaners' out of the guys who leave, or get them to sell-on. Now, if only I could get everyone in Australian Ultimate to agree to wear black shorts and black socks . . .:) If the Passion and the Lovers continue this season, hope there is talk amongst the UQers of buying something like 50 UQ shirts (and flipping a disc to see who wears white whenever they play each other).

Regarding layouts - yes I have tagged Tony and J-Ray as the Hammer Kings, but who are the BPL Lords of Layout? Brett Matzuka is the obvious one coming to mind – that guy is like a fish through the air – the barracuda of boing, the halibut of horizontal, the flounder of flight. Anyone else?
Posted by JdR at 12:33 pm

Email ThisBlogThis!Share to TwitterShare to FacebookShare to Pinterest
Labels: BPL

Him is pleased with your opinions and Him supports your views.

However some people really do need to leave immediately like donnie who has a whopping 3hr drive home (respect to that guy for driving so far to get here, larkin too)

Speaking of larkin, kudos to him for starting the MBB Fresh Buggers team. from what is down on the AFDA website they are rolling with a "newbies" and "grizzled ancients" formulae.

I would like to see some more social talk after the games, we all seem to be so positive after the games but about 75% of people leave so quickly, however there is a few dedicated people who hang around and get to catch up with eachother, talks over a beer would be a big draw to the party tho so with any luck.

wrapping up,
Him is pleased with the post and knows that his thoughts are supported by others.

Dearest Him (if that's your real name),
Yes, Donnie and Grannie and Redcliffe Dom and GC Phil and GC Jimmy are exceptions.
Obviously they should have their social beer before the games.
JdR is pleased to have a commenter of such quality and insight.

I've very excited to see how the 2 'new' MBB squads go in the up coming league. We are used to feeling like big boys in the comp, having been in the last 5 finals (3 wins, 2 losses). I'm interested to see if we will go back to bottom feeders for a league.

The first Bug on Bug match up will be pretty spicy as well.

In regards to who are the layout monkeys of Brisbane ultimate you'd also have to included guys like Mikey Neild, he definitely puts in some big bids.

Al "twinkle toes" Don doesn't mind throwing himself around especially on those wayward dump passes that just seem to float for ever.

Old mate Wetnose has been putting more bids of late, he took a couple of nice layout grabs and got a couple of layout touches on D.

Youngin's like Johnny Mac don't mind the occasional bid either.

Even I don't mind getting horizontal when the occasion calls for it. And when I'm playing Frisbee I occasionally make a layout bid as well.

Though if you were looking for an underlying commonality between guys that bid and guys that don't I think that as soon as your age has a 3 at the start of it the bids definitely decline in number, unless your Jangles, that is more to do with a feminine attitude.

If anything I think the frequency of layouts is definitely on the increase in Brisbane ultimate in general, which is great for the level of the game and physios.

Get Emails When We Update

JdR is the lead blogger, and can be contacted at jjderooy at yahoo dot co dot uk.

Wetnose is our Special BPL Correspondent.

Want to join the team? Get in touch.