End of the Whippet Run

The Whippets were able to match things better in the second, but couldn't overcome the defecit, leaving the final score 15-9.

The UQ Lovers credited their win to their awesome fitness regime, having played their first three games of the 2006 season with only six players. However, the return of several players to the squad as lectures kick off next week was certainly a factor.

But as said, the Whippets faced probably the best first half they've seen in a long time - nothing hit the ground for the students, while the old fellas seemed to throw away chance after chance, despite plenty of their trademark patient offence.

Still, the end of the Whippet Good run had to happen sooner or later, after a fantastic run stretching from the beginning of last season. The 13 games at the end of 2005 and the three starting 2006 seem likely to be a record, with a draw and several one and two point wins included.

Can Whippet be Good and regroup? Will the start of lectures bring a heap more Love, or hinder it with the demands of assignments and pretty girls? We'll see.
Posted by JdR at 8:59 am 1 comment:

The Bugs had a mixed bag on it's team - a bunch of experienced players and a whole bunch of people who hadn't played NUFL before:

The highlight of the weekend was the first game in which we beat 4th seeded Deathstar (we were seeded 5th). Beforehand we thought we had a good shot at beating Deathstar, but given that it was our first game and many of the team had never played together, it was going to be a tuff ask for the first game of the weekend. Somehow we managed to pull it all together and beat them by 1 point in 'extra time'. The rest of the games for the weekend for us went according to seeding, but we had the satisfaction of preventing Chilli A from getting to the final by denying them the bonus point they would have gotten had they beaten us by 10 points or more.

It was great to see all the new players competing at this new level and I think the experience was something they can all learn from. Overall the signs are good for the next NUFL in March when a few key players will be returning to the team, mainly big Mike Nield.

Another highlight of the weekend (for me at least) was one of the first ever third umpire referrals. I caught a Jason Ray huck right near the edge of the endzone and had toed the line and fallen out of the field afterwards. No one was really sure if I was in or not and it was therefore initially called out (especialy by Pottsy!). Then a cameraman who had been standing right on the line said that it was actually in. We went and had a look at the digital display and sure enough there it was, disc in the hand and foot on the ground and behind the line - GOAL! 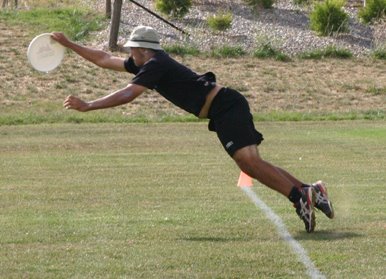 After such a great weekend I am now considering not going to the last of my 3 U2 concerts to come to NUFL 2 - now that's saying something!

More info on the weekend should be avaliable here soon: http://nufl.com.au/event_index.php?event_id=1
Posted by Rueben at 7:33 am 2 comments:

Another Issue of Australian Ultimate in the Mail

I've been busy as buggery with many different things the last few days, so please forgive me for a short post. While not strictly related to Brisbane Ultimate, I figured I'd note that the January 2006 issue of Australian Ultimate (aka the AFDA Newsletter) went into the mail on Friday/Saturday/Sunday (and sorry, a few people won't see their's in the mail until tomorrow, as I ran out of stamps and time). As you may imagine, its always a pleasant feeling to get it all done and out the door - this for the 14th time for me!

In a response to an earlier post, mighty Matt Ryan reckoned that 85-90% ofAU newsletters went in the bin pretty quickly after being received. Quite possibly this is true. Some readers may think this implies that the newsletter is maybe not worth doing, and certainly people have suggested that to me at different times and for different reasons. My short response is usually that there's plenty of value in people physically getting something in the mail from the national assocation and its generally been left at that. There are plenty of other people who tell me its great and thank me and the AFDA for it. But like any reflective person I still occasionally question the value of the exercise.

A quick encounter from a game on the weekend (the game itself is a topic for another post) reminded me of this value though. A fella from Byron whom I'd not met before made a real point of thanking me for the newsletter. I'll paraphrase what he added (and hope he won't mind) - something like "It's been my only real connection to Ultimate outside my local game" and "It's inspired me to come up to Brisbane and join this club and get to World Clubs."

Well, that made me feel good!

ps comments on AU always welcome.
Posted by JdR at 10:37 am No comments:

Get Emails When We Update

JdR is the lead blogger, and can be contacted at jjderooy at yahoo dot co dot uk.

Wetnose is our Special BPL Correspondent.

Want to join the team? Get in touch.